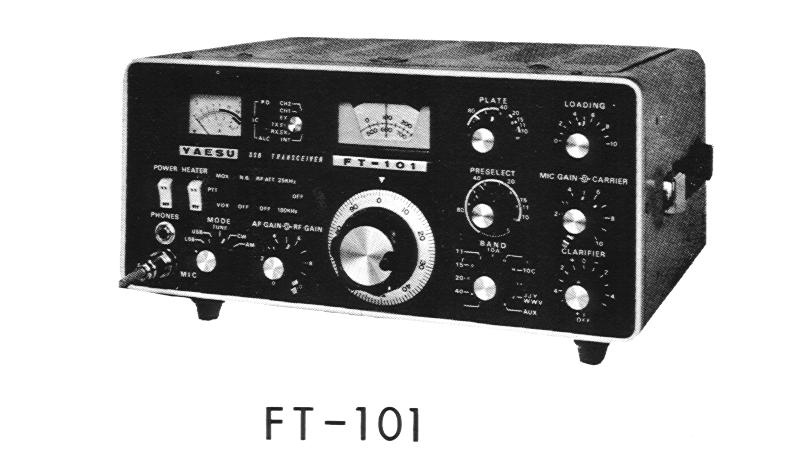 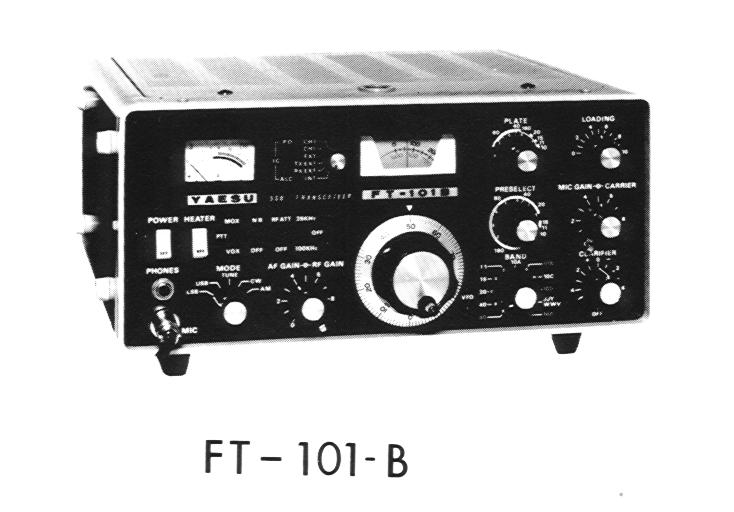 The FT-101 series of transceivers appeared initially in the USA in small numbers in late 1971, and gained almost overnight approval of amateur radio operators for their quality of signal, flexibility of operation and the professional attention given to workmanship and design. Each Transceiver shipped is normally accompanied by an instruction manual, a set of accessory plugs, a high impedance (50K) dynamic hand mike, and two cables; one for AC operation, the other for DC power hookup. The exception is the FT-101EX, which has no DC capability, although it can be added by installing the DC-1 unit. The installation of the DC-1 is also covered in this manual. These specifications differ from the latest issue FT-101E series only in the frequency range (which now includes the 160 meter band) so the owner of a vintage Yaesu FT-101 should not feel he was obsoleted too badly along the way, but newer FT-101’s did include major circuit improvements. For example, Yaesu engineers developed a major modification that significantly improved the Receiver side of the early FT-101, and after serial numbers 25,000 - all FT-101's came from the factory with some different boards and circuits than early models. This led to a situation where two different models existed side by side, with the same FT-101 designation, so in this manual, pre S/N 25,000 units are identified as "early", and post S/N 25,000 as "late". (We only use the last five digits of the Yaesu serial number - the other numbers and letters are used for internal factory control). The entire modification which made an "early" into a "late" was developed and sold as an update kit, which included a 25 page instruction guide, complete with pictures and sketches. Total confusion promptly occurred, with hams ordering the kit (known as the MIR-1 Modification Kit) who unhappily did not have the test equipment necessary to do the re-alignment, or just plain lacked the "know how" to do such major surgery on a sophisticated electronic assembly. After fighting the flood for a few months, Yaesu withdrew the kit from the open market, and today will only install it at their factory. There was no FT-101A produced, but when the second set of major mods appeared, the new issue was designated FT-101B, to emphasize its model change, including all of the updated circuitry, plus adding a new band; 160 meters. All FT-101B’s and "E's" will work on the 160 meter band, but you may have to order a crystal, etc. The FT-101B was superceded by the FT-101E, which included an RF Speech Processor; the FT-101EE which omitted the Speech Processor; and an "AC Base" version, FT-101EX which did not have the built-in DC supply, Speech Processor, DC cord, microphone, or 160m crystal. Again, no FT-101C, or D versions reached production status. 1-2 Early FT-IOIE’s used a Speech Processor that had to be set manually on each band for clipping level, which meant considerable cover lifting for the amateur who switched bands frequently. To eliminate this handicap, the processor level control was combined with the clarifier pot using a paddle knob. At the same time, the processor itself underwent a redesign, and emerged as an extremely low distortion producing RF processor, noticeably superior to both previous Yaesu processors, and competitive units.